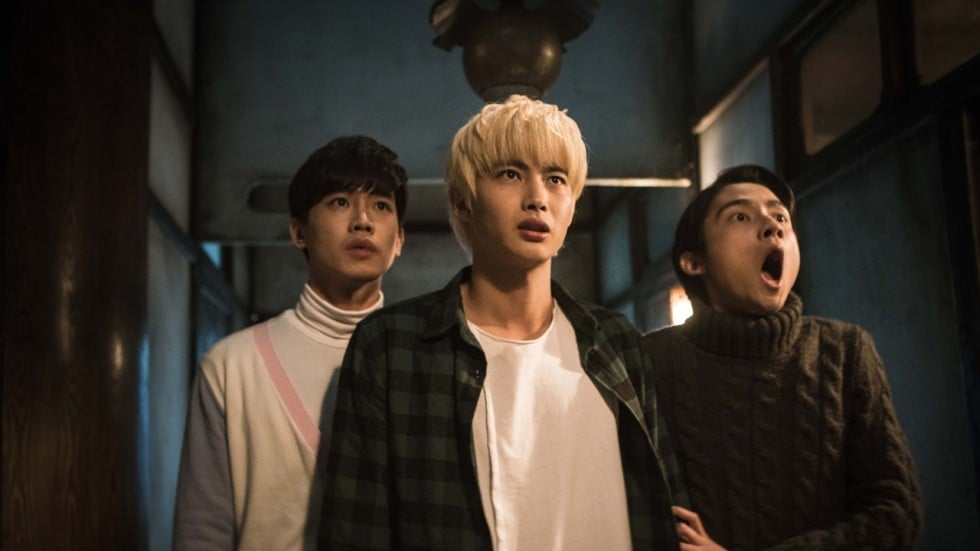 Synopsis:
Xiao Jin is a 20 year old delinquent high schooler who gets a call from his grandparents and returns to the old family spa hotel with his friends, Lu Qun and Little Princess, only to find out that the hotel is haunted.

Taiwan seems to be on a roll for “youth films” with films like Boyfriend, Girlfriend, You’re The Apple of My Eye and Our Times that every time I see a “youth movie” from Taiwan I’m almost tempted to lap it up. Of course, I’ve experienced many, MANY disappointments where I cringed at another dumb slapstick classroom humour and shallow characters dangling their legs as while looking out into the far off horizon.

So it was pure joy when I chanced upon a relatively unknown Asian film on Netflix (with a badly written synopsis) that I ended up liking more than I thought I would. Not that I had any expectations in the first place. I found myself giggling out loud within the first ten minutes. A rare feat since I never seemed to gell with the Taiwanese slapstick humour. The plot was intriguing and carried the story well. The entire film seemed like a lot of fun with hints of backstory here and there to really flesh out the characters. I thought Little Princess’ character was a nice touch to Xiao Jin’s tough exterior, where Little Princess was soft and gentle, Xiao Jin was harsh and puts up a brave front. Lu Qun was just annoying throughout but added a nice balance to the trio.

I love how the film doesn’t try to be anything else but have fun. It gets painfully obvious when a film or a drama tries so hard to be something but ends up becoming cringey or contrived. SITHS doesn’t do that. Instead, the film bounces along, disrupting incredibly creepy moments with humour. For someone who hates horror films, the random (though predictable but still funny) interruptions act as a breather and breaks up the tension into a laugh rather than a scream.

And also the subtle humour behind the main character’s name Xiao Jin (小金) which translated to “Little Gold” in reference to his blond/gold hair colour. A parody to the typical delinquents look.

The ending was somewhat predictable, and the film introduced nothing new to the horror-comedy genre that’s not already been done. But it was still an entertaining watch, and seeing the three guys bond over a shared fear of the ghost residing in the hotel was hilarious yet heartwarming. The best part was how the film never took itself too seriously and instead bounces along at its own pace.

While not a masterpiece by any means, the film is definitely worth a watch especially if you’re someone who’s just looking to kill time or you love Taiwanese films.

Warning: The film contains some graphic visuals that had me holding a pillow up to my face. Hoping I don’t have nightmares tonight.

2 thoughts on “Review: Secrets In The Hot Spring (切小金家的旅館)”

The Many Faces of Ito (so good!)